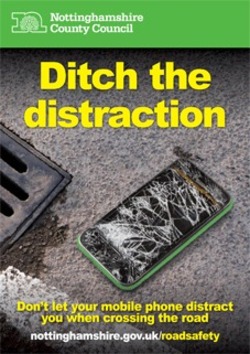 This campaign urged Nottinghamshire's pupils to ditch the distraction and put away mobile gadgets like phones and MP3 players while using the countys roads.

The county council's road safety team developed the campaign in a bid to slash the number of accidents involving 11 to 18 year-old pedestrians  many of them involving young people wearing headphones.

It is a fact of modern life that more and more schoolchildren are using their mobile phones or listening to MP3 players whilst out and about  and unfortunately they can be a distraction.

The campaign is based on a national study in 2011 of 4,000 pedestrians which showed that more than half were crossing roads while using a gadget and not paying proper attention to cars. And one in 10 motorists reported having had a near-miss with a so-called iPedestrian in the past five years.

Ditch the Distraction included posters and postcards being distributed to schools, a Facebook page and  in a County Council first  pavement art in the form of one-metre sq stickers positioned outside schools.

The posters and the pavement art are striking but the campaign message, in a nutshell, was simple: dont be distracted by your mobile phone or MP3 player when out on the street, crossing the road, or riding a bike.

The campaign was subsequently picked up and used by Network Rail and in July 2013 was highly commended in the 2013 Network Rail Partnership Awards. This award came a few weeks after the Local Government Media awards when the campaign was runner-up in the community safety category.

In the post campaign evaluation, analysis of social and digital media showed that the campaign Facebook advert was seen 3,193,610 times generating 812 clicks through to the road safety landing page. Visits (unique and repeat) to the road safety section of the Nottinghamshire County Council website more than doubled in September 2012 when compared year on year (731 views compared to 342 in 2011). There were 70 visits to the pedestrians page (compared to 23 in Sept 11), and 83% of these were new visitors.

The road safety team carried out surveys with students at the school gates, and results included:

 Its amazing, I noticed this artwork right away  very effective
 People don't see it as much because it's on the floor
 Bright colours grab my attention
 Sign post would be better
 Bit of a distraction itself, but great
 Looks like vandalism (sic)


The total cost of the marcomms activity was 6p per pupil and 0.7p per Nottinghamshire resident.

The casualty stats for the three-month campaign period showed a 19% decrease over the previous five year average for 11-18 year old pedestrians.